A friend just sent me a link to http://www.thequiltshow.com/os/blog.php. I don't really know quite how to describe it, but trust me if you are into beautiful, inspiring quilting you won't be disappointed. I know I'll be making regular visits. Enjoy!
Posted by Quilt Rat at 9:41 AM No comments:

Recently, while spending a little time checking out other blogs I came across this one which has great ideas on what to do with those selvage edges. Since I was re-organizing my fabrics anyway I decided to begin collecting all those edges and thinking of ways I might use them. Turns out that since I buy almost exclusively batiks, usually fat quarters, I don't actually have a lot of fabrics with selvages containin

Still, I like the idea of seeing the text so I added what I had in the way of black and whites to a vest I was in the process of making.................the selvage edges turn a rather boring piece into something just a bit more interesting. I have a feeling I'll be taking a closer look at the "edges" of future fabric purchases.
Posted by Quilt Rat at 11:08 AM 3 comments:

The most asked question at my recent workshop? How do you know what to quilt? Unless you are wanting to use stencils or are doing a very traditional piece, you will likely be asking yourself that question. In most cases the quilt will tell you what to do, study it, listen to it. I 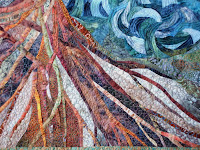 n this post I am going to give you some examples and explain why I chose to quilt the piece this way. Earthbound was the first quilt that I really let go and did all sorts of different things across the entire quilt. First I broke it into sections........tree, sky, hills, water, earth and so on. When I began I really had no idea of what I would do. I carefully considered each area and stitched to capture the effect or "movement" I wanted. I also wanted to carry the design out into the border. 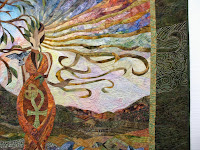 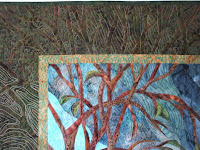 So if you look closely you will see that I simply continued that "curly Q" effect in the lower sky and out into the border. Gave the hills some movement by changing the dir 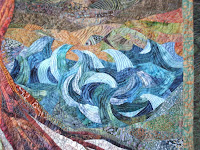 ection of the stitches. See how the tree branches seem to be growing right through the inner border. These roots stand out because the stitching is fairly dense all around them. I used several different stitches to get the feel of layers of earth and rock. Examine the waves, I just followed the curves to emphasize the movement. It may be hard to see but I even stitched tiny scales on the fish.

In Siren's song, I wanted that underwater feel. I did some waving lines and some tight elongated stippling here and there, wanting to have the feeling of the elements being 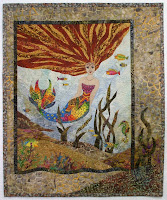 surrounded by gently moving water. I wanted the hair to look as t 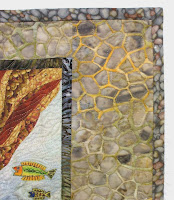 hough it was floating and maybe just slightly tangled, so again I changed direction of the stitching often. There really was no decision to be made when quilting the border, that wonderful print told me exactly what to do, I just stitched around those rock like shapes. 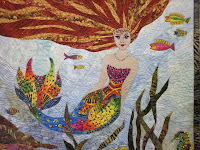 More on the workshop

One of today's participants just sent me some pictures she took.

Here I am demonstrating ( that's me with the snazzy red gloves)

and then here are a couple more shots as student's get back to their machines and try it out for themselves.
Posted by Quilt Rat at 9:14 PM 1 comment:

Today was the big day to conduct my very first workshop. I have to admit I was a bit nervous and even though I

had thoroughly and carefully prepared notes, I did not quite follow the order I had intended. In the end I think it all went fairly well.
My "students" (19 in all ) were quite attentive and eager to play with their stitches. Just look at them all concentrating so hard.........hey I thought this was supposed to be fun.

We started by working on bringing up that bobbin thread and perfecting those starts and stops locking the threads, then it was onto some meandering, as confidence began to build so did t

he desire to try some more adventurous stitching.
I bravely demonstrated a wide variety of stitches in bright red thread. Okay so make a less than perfect feather in matching thread and just maybe it's not all that noticeable but let me tell you, do it using bright red and you are not hiding anything!

I really had hoped to have more pictures to post but I guess I 'll just be happy I managed to get any at all.
Here are some examples of the stitches by some of today's "students"
Looks like they are off to a great start. 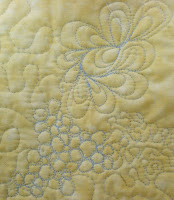 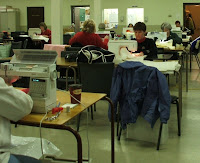 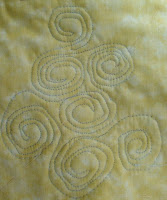 As you can clearly see, these quilters had no problem getting creative.


So at day's end I hope everyone went away with a little more confidence in their ability to do this mysterious thing called free motion quilting. In addition to building their skills they also each took home a "Quilts for Kids" quilt to stitch and make ready to be given to a child in foster care.

I enjoyed the day and I hope everyone who participated did as well.
Posted by Quilt Rat at 7:16 PM No comments:

This Saturday is the day that I will be conducting a machine quilting workshop. I have been busy with making samples, organizing and planning to get ready. Although mostly I will show the type of free motion, non-marking type stitching I do on art quilts, I do know that I am dealing with mainly traditional quilters so I will want to cover some stencils and marked designs.
I came across, and purchased a 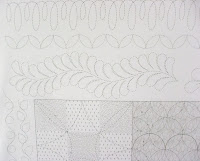 pre-printed panel at The Marsh Store called "Skill Builder", I think these are great for beginners or just to have on hand whenever you have a bit of free time and want to "practice" your free motion skills. The Idea is to remove the thread from your machine and stitch out the designs. In some cases only 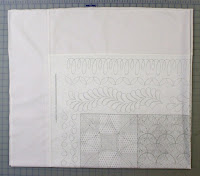 a portion of the design is marked to get you started and then you take it from there. What a great way to "set" the movement in your mind.
The only thing I did not like about the panel is that the printed designs go almost right to the edge, making it difficult to stitch that area. Using some inexpensive broadcloth, I added a few extra inches all around the panel so that there is now something to "hold" onto.
I hope to get lots of pictures from the workshop to post.
Posted by Quilt Rat at 3:07 PM 2 comments:

Last week I posted a photo of a painting I did that is to be part of an ongoing project for 2009. Here it is with the next step completed. I used the "Oliver Twists" to do the thread painting. Since I have not worked out what exactly this will become, I will stop here and begin to add new pieces. Once I have a few I

may have a better idea of how it will all go together. This is something I will just be making up as I go along, sometimes it's fun to not plan every detail.
I have never tried to "thread paint" using only fabric and stabilizer before but I am fairly pleased with the results. I think it will be much more interesting once it can be quilted.
Posted by Quilt Rat at 2:42 PM No comments: