Who doesn't LOVE a pretty quilt show ribbon? I am the proud recipient of these beauties.
Imagine my delight to learn that the block I entered for the "Memories in Black and White" annual quilt block contest held each year at Joseph Schneider Haus in Kitchener ON., had been awarded First place honours. 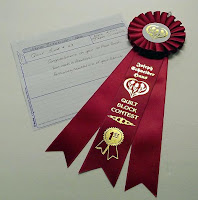 I blogged about this block here.
Each year a quilt is made from the submitted blocks that is later raffled to raise funds for various projects at this historical museum. Here is the quilt on display after a quilting bee in which Mennonite women from the area expertly applied their beautiful hand quilting. It will now go off to be bound and will return to hang in a place of prominence until the raffle winner is chosen in Dec of 2012

The comments from the judges just blew me away!

and if that wasn't exciting enough, I got quite the surprise during the Scottish Tea last Wednesday evening at a gathering held at McDougall Cottage in Cambridge ON., where the annual "Wee Quilt Challenge" is on display until Labour Day. The theme for this year's challenge was DIY Plaid, entrants were asked to create their own plaid. With not much more than plain cotton and colour pencils, I created my plaid, which I then fashioned into this fully functional wee kilt. It is titled "Kuilt".........what is a kuilt? well, it is a quilted Kilt, of course!
here it is hanging on the wall at the Cottage.

This ribbon will hang along side it during the show.

I plan to show more details of this piece and how it was made in my next post.
Posted by Quilt Rat at 1:29 PM 23 comments:

It's all done with Mirrors!

Don't we all have items on our list that we forget to pick up at the quilt shop only to remember later, when you "need" it? I have long thought a set of right angled mirrors would come in handy when designing. While at a local quilt show recently I asked Shirley, owner of The Marsh Store if she carried these, Shirley told me that she did not have any in the store and would gladly order them for me, BUT she said, her opinion was they were a little pricey for something you could likely make yourself. She went on to suggest that I purchase a couple of inexpensive mirrors from the dollar store and see what I could do with them. Well.........THANK YOU Shirley......money saved on mirrors can be better spent on your luscious fabrics and fibre art supplies.

So.......$2 (plus tax, of course) and I now have a quick and easy way to develop designs and see how multiples will look, without having to spend time on the computer manipulating photos. 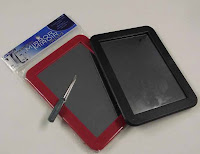 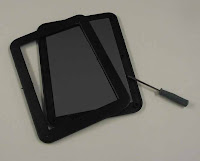 I used a set square to get the proper angle, a little tape on the back and I was in business ( you do need to leave a small gap when creating the "hinge")

Did you notice the doodle on the sketch pad there? Look how these mirrors allow me to see all sorts of possibilities simply by placing the mirror(s) on various sections of the doodle. You will also see that sometimes I placed the mirrors at less than a 90 degree angle to see the effect even more sections would give. 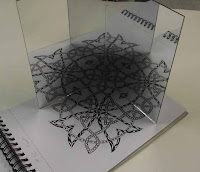 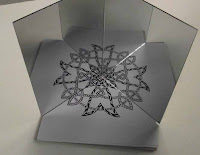 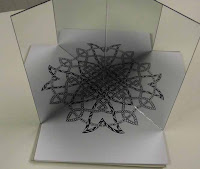 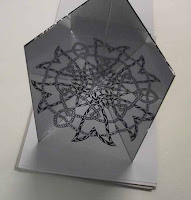 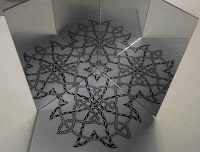 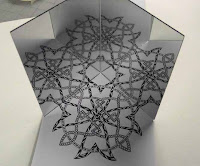 I LOVE a Challenge

Like most guilds, each year we are given a new challenge. Those who chose to participate were given some fabric and a just a few rules. Our guild is celebrating 30 years so our challenge was to work with the fabric given ( our guild colours Blue and Gold) along with any other fabric of our choosing. The rules were pretty simple. The challenge fabric HAD to be visible on the front of the piece and it also needed to have at least 1 dimension measuring 30 inches.
The fact that blue and gold is likely one of my least favourite colour combos made this even more of a challenge for me.
I generally use challenges as an opportunity to try something that I have not yet done. I used this as an opportunity to do a small whole cloth type quilt with a "faux"trapunto effect. It is titled Challenging the Rules, the 30" dimension is from corner to corner on the diagonal.
I started by creating a fairly simple design with our guild logo/block at the center. These bits were cut from the challenge fabric and fused to a plain piece of muslin. 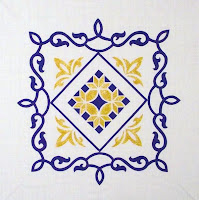 Next, I overlaid a piece of tone on tone white fabric on top, which as you can see quiets down those colours very effectively. 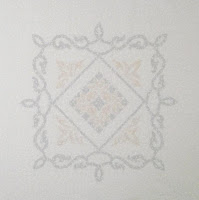 I used 2 layers of batting to create more drama to the areas that would not be stitched.
I began by stitching just around the motifs. 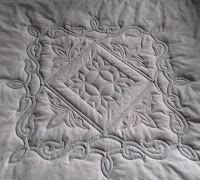 Then it was a simple matter of experimenting with a variety of free motion quilt designs, again, I wanted to try some things I had not done before, such as the crosshatching and circles.

I learned a great deal working on this little quilt and really want to tackle something similar on a much larger scale. I learned that eyeballing straight lines is not a very good idea, I learned I could FMQ crosshatch using a ruler, I learned circles can have the illusion of round without being perfectly round and I also learned that it is rather difficult to properly photograph a white quilt.....I apologize for these photos (they are not the best)
I wondered if I would be disqualified because of my interpretation of the challenge fabrics being "visible" on the front. But apparently the voting members thought it was okay as this piece placed third among some really fabulous work. 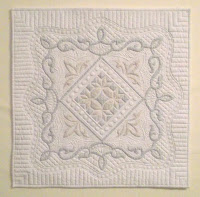 I am ALWAYS amazed at the wonderful, unique variety of work each challenge brings year after year.
Posted by Quilt Rat at 4:27 PM 15 comments:

I have been stitching bugs and unlike most quilters I don't seem to have a large collection of thread, I think this is going to have to change. Some of them have been stitched using regular embroidery floss and I am finding that since this piece is being handled a lot, the thread is looking a bit "hairy", not liking this at all. You can see what I mean with this spider and flying insect. 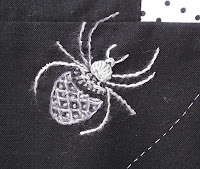 Then I began using a single strand of some machine embroidery threads I have, they look like rayon but are actually polyester. I have stitched them in a style similar to Kantha stitching inspired by a piece Bev White showed us. 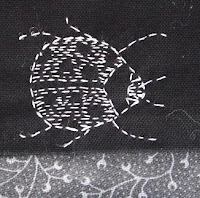 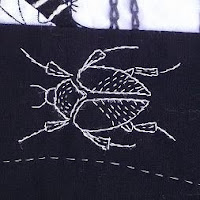 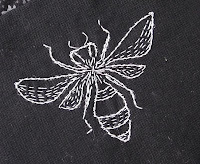 Here they have been done in positive/negative for a rather interesting effect.

I have now added a very thin layer of batting and plan to do some hand quilting on this piece. Great for relaxing outside on the deck.
Posted by Quilt Rat at 10:19 AM 15 comments:

Working in greyscale is an interesting exercise. You can certainly learn a good deal about value this way. I seem to be in a black and white mode these days.
This year's block challenge at Joseph Schneider Haus in Kitchener was themed "Memories in Black and White" Each year a quilt is made from submitted blocks that will later be raffled as a fundraising project. This is the block I submitted. It is done completely with black, white and grey fabrics. I chose to design and hand applique a block using my version of Forget-Me-Nots. 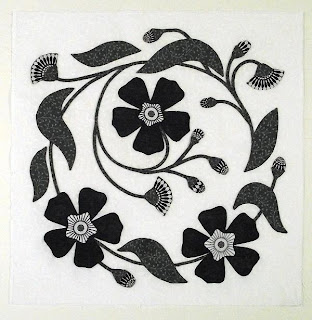 I made the best use I could with the few prints I had. The "buds"are almost all a bit different even though they came from the same fabric. The main flower's centers were created by being very selective about cutting this Mark Lipinski print. As you can see, I never hesitate to cut holes in the middle of a piece of fabric