That's me!
When I was asked if I would consider taking on the job of CQA's Artist in Residence, I immediately said yes..........what a fabulous opportunity and learning experience this will be. I am thrilled to be a small part of the Editorial team.
A couple of weeks ago I had mentioned that CQA members would be hearing more from me very soon.........well the latest issue of the Canadian Quilter is out and contains my first article.
here is a sneak peek......( sorry, that is all I can show)........ members will see the pattern, instructions and tips found on the next pages. 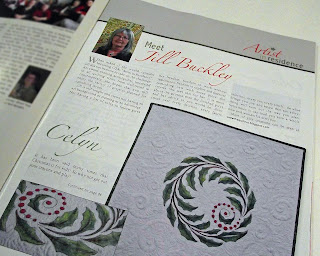 I know that not every project will appeal to all quilters, but I am hoping to provide a wide variety of designs and techniques over the coming year that members will enjoy and find interesting. The deadline is fast approaching for my next submission.

The one thing I would guess we all dislike having to do, is to sew in reverse (rip out stitching) but I decided I had to go backward in order to move on. A few posts ago I showed the center portion of a bed quilt I am currently working on. Well, I really, REALLY, did not like the look of those blue strips separating the blocks, I just knew they HAD to be removed. I suppose that is a downside of not following a pattern and "making it up" as you go along.

Not sure why I was bothered by those strips..........just seemed a bit cluttered, I am much happier with this cleaner look. Here is the pieced top, which measures 102 x 108 inches. Now I just have to find a space large enough to lay it out for the backing, batting and basting process. 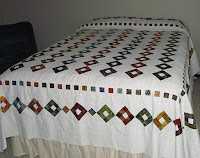 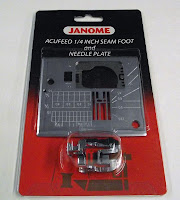 This past May, the CQA (Canadian Quilter's Association) mini conference was held here in London ON. I designed and created a pattern especially for the event. This leaf shaped fabric bowl (we are the "forest"city after all) 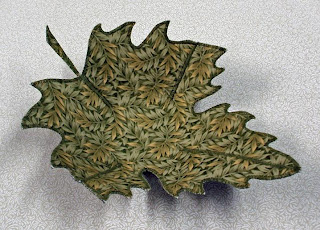 Originally, I thought that a few would be made as decor, but the local organizing committee had other ideas and the project took on a life of it's own. The pattern was sent to guilds across the country and was printed in this issue of CQA's The Canadian Quilter. 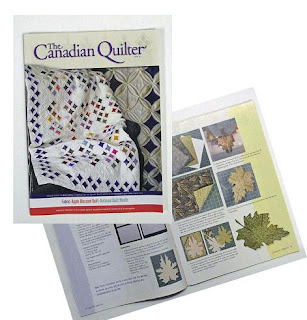 It wasn't long before the "leaves", made by quilters from coast to coast began arriving. In this article, you can see that Christine is nearly buried under just a small sampling of what arrived at her door. 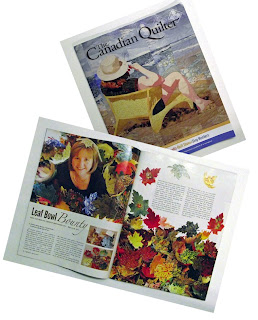 100s of the bowls were given away to quilters during the 4 day conference, and those who attended the Gala banquet received their leaf bowl filled with all sorts of fabulous quilty treasures. 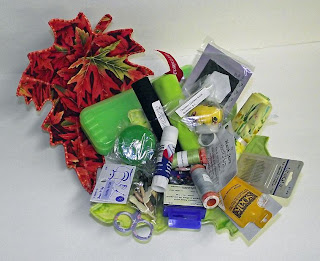 This was the first time I had created a project for others and I was completely amazed by the response.
Are you a CQA member?...........if so, you will be seeing more from me very soon....ah, but that is another post.

I visited the Imadon street painting festival that was going on this weekend. Can you imagine doing all that work only to have it disappear within a few days (sooner if rains are heavy)? The artist's spend several days in awkward positions, on hard asphalt, under the hot sun as they produce incredible works with simple chalk pastels.......I just HAD to buy some for myself :-)

I only took photos of this artist's work, with her permission, of course. Axl T. Ernst was the feature artist this year.........can you see why? You can visit her web site here and to see more photos of this work in progress, go to her blog here 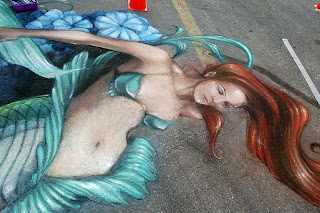 It really is quite amazing to see what can be achieved on such an unforgiving surface, the work is so fabulous you may not even notice the patched cracks in the asphalt or the parking spot lines.
I could not resist a photo of the state her shoes were in as she neared the completion of the festival. 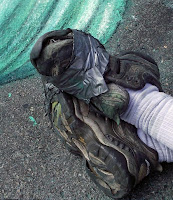