Making a Stencil with Window film

My most recent post talked about using technology in my process, using my iPad and an app called Concepts, I had created an image that I wanted to turn into a stencil that would allow me to print in a variety of ways. 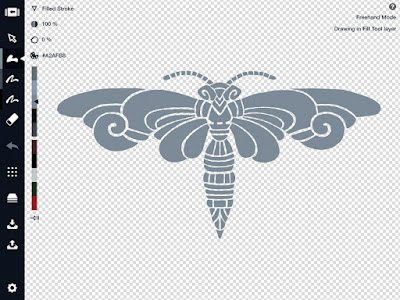 Once I made my stencil, I got out my screen printing supplies. (they had been sitting unused for a very long time) 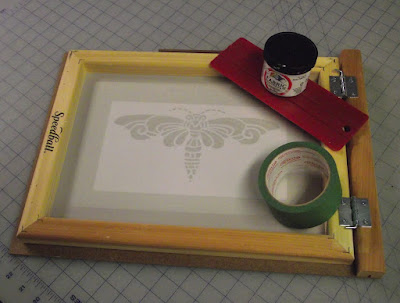 I flooded the screen with ink and then set it down on my stencil which allowed it (the stencil) to "stick" to the underside of the screen. Here is a sampling of the images I pulled. Several are on plain black cotton and the rest on a variety of hand dyed fabrics. 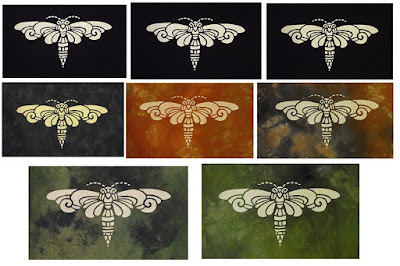 Now, you might say....why would you want a bunch of white prints like that?.....well, the answer is that I can go in now and add colour......a little or a lot.
this is an example of one of the white on black prints that I added some colour to using Tsukineko inks and Aloe gel.....subtle blues and greens 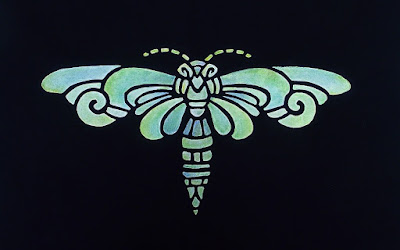 But one could go crazy and add some wild colour too........ this one below, was a "test" of a bunch of different things, paints, markers, inktense pencils, dye sticks and what ever else I got my hands on just to "see" what would happen.....the result is pretty jarring but it was a good way to learn what works and what doesn't while only ruining one print ( something like this could work well if you want a stained glass effect) 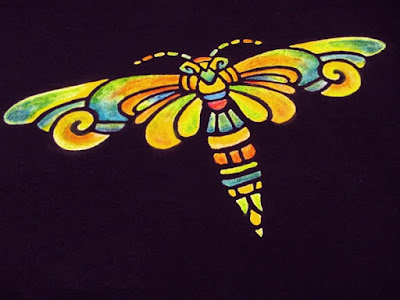 I also used the stencil ....as...well...a stencil.  I laid it on top of this commercial fabric and "stenciled" with Seta-Color fabric paint......after being heat set, it is nice and soft and perfect for the addition of hand stitches 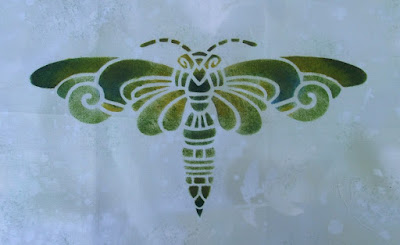 As you can see I used this stencil in a variety of ways....and had to clean it several times. When I used the silk screen, I forgot to remove it before I went to rinse my screen so it got a real scrubbing. I was a bit concerned as this is how it looked after that initial cleaning 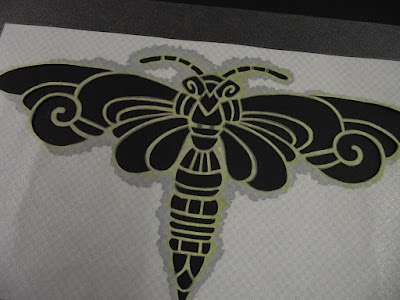 Yikes!.....but no worries, I placed it between some paper towels and left it to dry weighted with a heavy book ....it dried flat and I have continued using it with no problems.

as you can see.....I have used it many, many times and it is still holding up well. 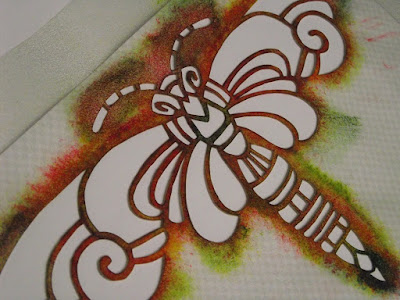 Okay....so...Want to make your own stencils? unlike using freezer paper or cardboard (that are often only single use), this method gives you a stencil you can clean and reuse. The bonus is that you can make it pretty much any size you want.
Here is what you need.....your image (I just printed my design on regular printer paper), a sharp pair of small scissors (or craft knife if you prefer), an awl, and window film.....yup...window film, that clear, sticky plastic stuff that comes on a roll applied to windows for privacy, available at home improvement stores among other places. 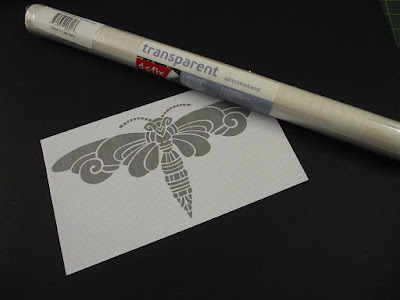 cut 2 sheets of the window film, allow a couple of inches all around the image you will be cutting. You are going to be trapping the image between these 2 sheets 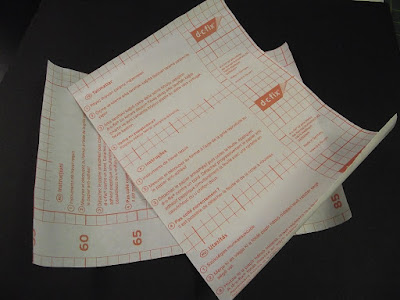 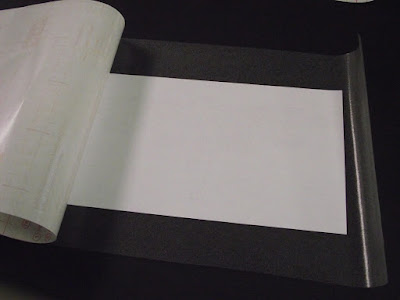 then place the next sheet, sticky side to sticky side and slowly, carefully, peel the release paper away....(sorry I really could not do this and take photos at the same time....hopefully you get the idea.) the end result should be your image trapped between these two layers of clear window film. You want to take care that you have a smooth flat surface with no bubbles.  I also used a roller/brayer to make sure I had a very tight seal. 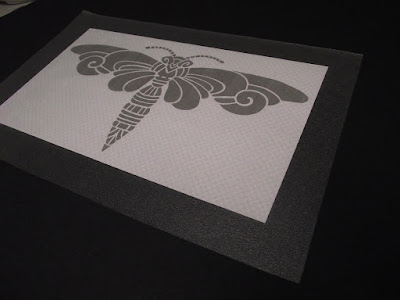 now comes the fun cutting part.....just like with my method of paper cutting.....I take the time to determine which areas to cut first, I poke some tiny holes with an awl to allow my scissors access 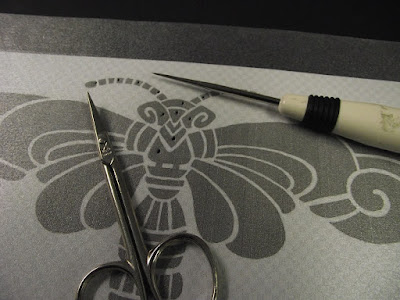 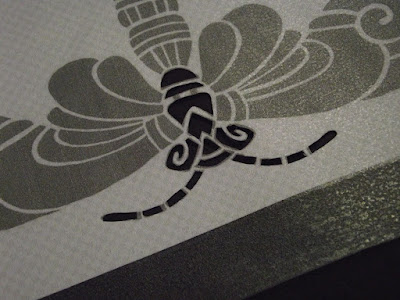 and continue working my way through the entire design, bit by bit. 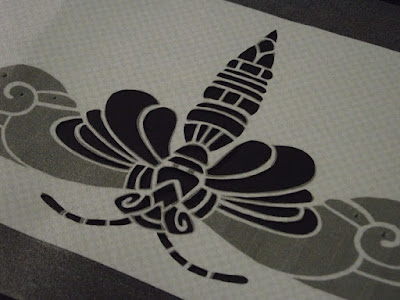 and there you have it......a flexible, durable, re-usable stencil. 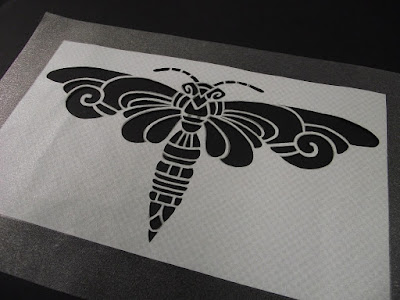 Even if you did not want to make prints.....this would be a great way to make quilting stencils that could be used with chalk, pencils, or Pounce pads to transfer the design.

My regular readers know that I love to doodle, and if you have been visiting here lately you also know that I have begun using technology more and more in my creative process.  I recently realized that since I discovered digital drawing on my iPad mini (specifically using an app called "Concepts"), I have not touched paper.

Because I doodle a lot, I always have a good selection of my own original artwork to play with when an idea pops into my head. This week I wanted to see if I could use my new found digital drawing skills to design some stencils.

on my iPad mini, within the Concepts app, I altered one of my doodles to make it usable for a stencil.
this is what it looked like on screen. 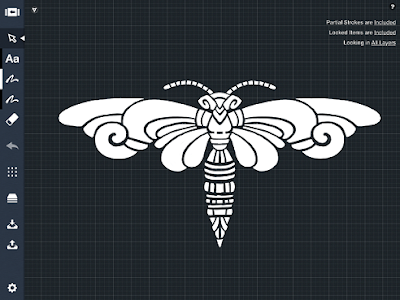 I sent it to my PC, inverted the image and printed it in black and white. Next, I traced it onto freezer paper and cut it out 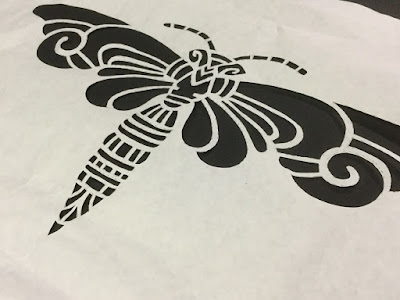 in this exercise I was using discharge paste....the trouble is that when you are using this stuff, you never know for sure what the end result will be.

The stencil worked great......here is the paste, applied and waiting to dry 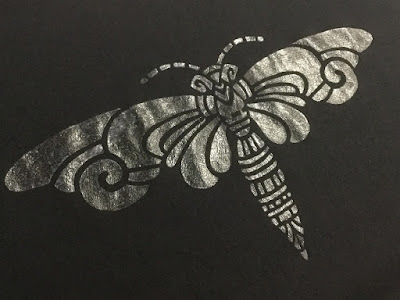 once dry, it was heat/steam activated with an iron 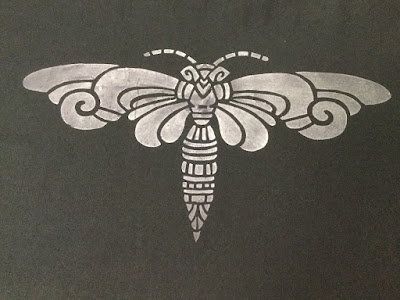 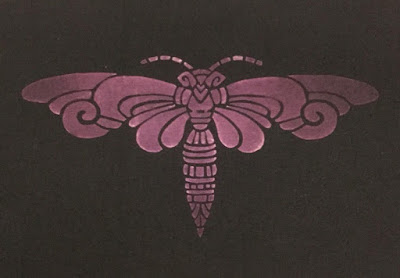 So.....for a one time shot at a print, this worked okay......but what if I want to do several? what if I want a specific colour?.....guess who is bringing out her screen printing supplies. More on that in my next post.