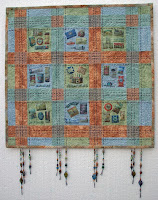 It is again time to see the wee quilts at McDougall Cottage. This year's theme is "Plaid-Vertising"
As always, the quilts must be no larger than 24"x24" and must contain some plaid. More about this challenge and to view my entries for 2007 and 2008 can be found here.
The past 2 years I have done what would be referred to as pictorial pieces but this year I decided to do something a little different. While admittedly neither is all that pretty to look at, I hope the viewer will find them interesting. This first one, titled Tartan Delight is my version of a tartan I

created by machine piecing several colours, along with computer printed plaids and then hand stitched yarn ending in a beaded fringe. ( there are a few beads made with the plaid fabric as well) Transferred photos of products and services reminiscent of Scottish life are featured.

The second is titled Plaids behind the Ads and is actually a classified page from the Herald. A few ads were removed so that the plaid fabric was allowed to show throw. Some of these ads make for entertaining reading, one asks you to take a dog to lunch, while another is an advertisement for tank driving lessons. This piece stemmed from me wanting to know if you could 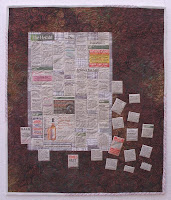 quilt a newspaper (which I did quite extensively). The binding on this one has the text Plaid-versting repeated in several spots.
The show runs until Labour Day so if you are in the Cambridge area stop by the beautiful stone cottage and take a peak.
Posted by Quilt Rat at 5:19 PM 10 comments: 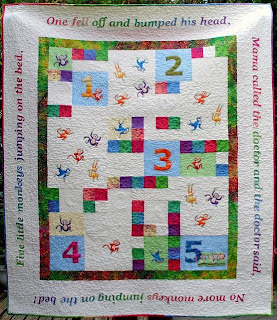 Those of you who visit here regularly may know that I don't do a lot of quilts using patterns designed by others, but occasionally one comes along that is just too irresistible and that was the case last year when I saw the cover Quiltmaker's summer 2008 issue of Quilting & Embroidery.
This quilt would be the perfect gift for my niece who was expecting but since I don't really have the type of embroidery machine necessary to make this quilt I decided to make it using a great monkey print I had. I still followed the pattern but the monkeys were simply cut, fused and satin stitched. To create the lettering I used my computer for the font and size required, reversed it and then did the same thing as with the monkeys. A print fabric with great colour gradation worked wonderfully for those phrases. Now if you remember how the rhyme goes, at the end the monkeys are to be put to bed, so I just had to create a little bed for them. When this quilt was completed I sent a photo to the

editor at Quiltmaker magazine to show her my version and to my complete surprise (and excitement) it appears on the "sew to speak" pages of the May/June 2009 issue of Quiltmaker. 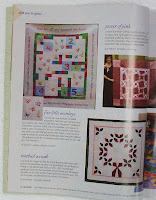 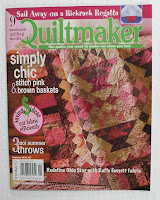 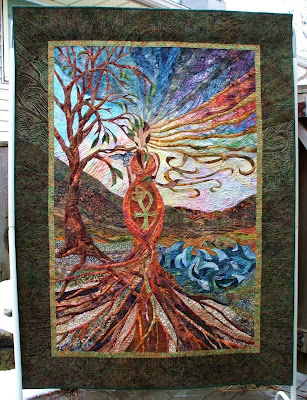 Have you heard? Amy at Park City Girl is hosting an online quilt festival. What a fabulous idea!
I am a little late joining in as the "festival" began yesterday and will run all week. All of the details are here along with links to see the show. I haven't done a lot of quilts just yet and I am not sure I have a favourite but I have decided to show Earthbound for the following reasons. It was an experiment to see if the curved piecing technique I had recently learned could be applied to a fair sized piece using a complex design and I wanted it to be the one technique only......no paint.....no markers.........no mixed media of any sort. I don't know why I just wanted to see if it could be done. This was my own original design that began as a doodle. Many who look at it may not realize that each and every piece is separate. Every piece covers the next on one edge or another. There are no raw edges. It was the first quilt that I had really done any stitching beyond stippling or meandering. I was quite pleased with the result. Click on the picture to see a larger image and more detail.
If you'd like to read more about this piece and it's process check out this earlier post. I'll need to set aside some extra time this week for this wonderful festival because at this point there are well over 200 participating, Come join in or just relax with your favourite beverage and enjoy the show.

More Print Play and a Postcard

Welcome to my 50th post. Not that it will be all that exciting. Just wanted to show a few more possibilities when making prints using paper backed fusible web. In my last post I mostly used fabric paints but then I thought what about some other simple items.
This postcard is done entirely using coloured Sharpie markers. I drew my letters in reverse, added stripes, dots whatever came to mind and then pressed it onto my fabric. The result is as clean & sharp an image as what I began with. Then I thought what about stamps, crayons, pastels? Take a look at this sample. The pink "feather"was first drawn (outline only) with a Sharpie marke 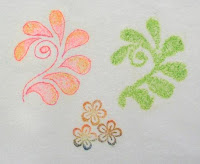 r then the area was filled in with crayon, I used a pink and then blended a little yellow in some spots. You do need to be careful and not apply too much pressure as the web can tear fairly easily. The green "feather" is the result of oil pastels and the little flowers are a rubber stamp and ink. Now I don't have a large stash of art supplies and the nearest Art supply store is about a 20 minute drive so I thought you'd like to know that the crayons, ink and oil pastels I used here, all came from the dollar store.
So you don't have to lay out a lot of money to experiment and play with images on fabric.
Posted by Quilt Rat at 11:30 AM 3 comments: 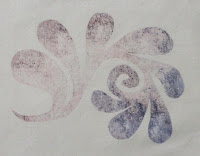 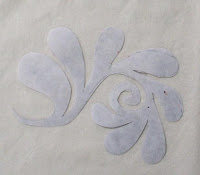 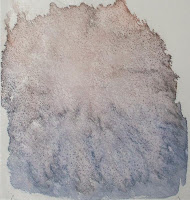 One of the things I like most about art quilting is having the freedom to play and discover new ways of creating interesting effects. I have been playing with making prints lately. I had read that you could make prints using fusible web and found that to be something I'd like to explore. So here is what I found. First I started by painting a very watered down setacolour fabric paint wash onto the web side of paper backed fusible web. I let the paint blend and run, then left it to thoroughly dry. I cut this "feather" shape and simply applied a hot dry iron. The print is quite spotty because the actual amount of pigment from the paint varied greatly across this first sample. Okay, but could this be subjected to water? I set out to answer that questio

n. I cut and ironed some small random shapes, submerged and agitated it in soapy water, wrung it out let it dry and then pressed it using parchment paper as a shie

ld and it looks g

reat, no colour loss at all.

I then tried this same idea using inexpensive crafter's acrylic mixed with a bit of textile medium, painted this feather (left)
cut it out but only the general shape leaving some unpainted web to see what would happen and repeated the pressing process.
This works as well but left the painted area of the fabric with a slightly rubbery texture. This sample also passed a quick wash test.

ng able to print a shape with out

any intricate cutting so I painted directly onto the web once again this time using a watered down setacolour paint, as you can see there was some bleeding which could lead to some other interesting effects especially with added thread painting or beading but in the end I cut each section separately and got a sort of stencilled look. I will continue playing to see what can be achieved. Imagine the possibilities!
Posted by Quilt Rat at 7:07 PM 4 comments:

In 2008 I was thrilled to have my piece Earthbound accepted in The Grand National Quilt exhibition. It was at that time that I found out that it was also the last year this show would be held at the Kitchener Waterloo Art Gallery, too bad as this was an incredible space for the exhibit.
Because the organizers now had to find a new location, the Grand National themed "Off the Wall", scheduled for 2009 has been postponed until 2010 when it will be held at the Homer Watson Gallery.
Wanting to still go forward with a show this year, the organizers decided to have a "mini"Grand National with quilted postcard art being displayed beginning in May and running through the end of August at the Joseph Schneider Haus Museum and Historical site just up the road a bit from KWAG.
A call went out for submissions of these 4 x 6 inch works to wish them well in their new venture. They have requested that they be able to retain all the postcard entries to help promote and support The Grand National and to assist with it's transition. There is a plan to select 12 of the entries to be included in a printed booklet that will be made available for sale.
They have a great new web site where you can view works from past shows and get updates on current happenings.
Above are the postcards that I sent.
This first one is of the Joseph Schneider Haus site. I titled it "The Journey Continues", as this has become the Grand National's transitional home. In making this card I did some thread painting, beading, painted batting to create the bushes in the foreground, left some rough raw edges for trees and then hand stitched the outer edge.
The second is called Inspiration Grows. It is a fairly simple looking tree that is made up of text showing titles, dates and venues of past and future shows, the ground and roots are made up of words like inspiration, imagination, creativity...etc
both have lots of machine quilting.If you click on the photos you should be able to see more detail.
So if you find yourself in the Kitchener Waterloo area this summer why not stop by and take in the show.
Posted by Quilt Rat at 6:44 PM 6 comments:

Over the last little while, I have seen many versions of these little houses made to hold everything from tea to trinkets or maybe even chocolates. I decided that one of these little houses would be perfect for another selvage project. Have you seen all the wonderful things being done with selvages? Spend a little time on Karen Griska's
Selvage Blog where she features works from artists around the globe. Building a house is easier than you think, if you click on the photo of the pattern it will come up much larger so you can see the dimensions written on it. 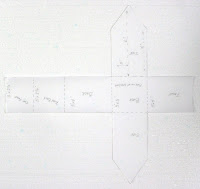 You can make them any size. This one is just 6 1/2" tall by 3" wide. You may notice that the pattern is one piece, I decided that would cause too much waste so I cut the peaked pieces separately.

Cut the pieces from Timtex and then cover both sides with fabric, add selvages, then machine a zigzag stitch around the outer edges, finish using a whip stitch by hand to hold it all together leaving one roof edge free for the opening, add a closure of your choosing and you are done............... just what does my little house hold? Well my selvages of course!