Okay, first of all let me clarify......it was someone else's stash...and I had help (thank you Susan). A few years back, a good friend showed me some wool fabric she was planning to rid herself of. She had been a rug hooker for many years but had pretty much given up that hobby for several others, so of course, I could not resist these beautiful hand dyed wools and said that perhaps I could do something with it. Well...guess what...it came to my house only to sit on a shelf until I finally decided I had to use it or move it on.
The challenge was that because it was a rug hookers stash, it was not "yardage", it was pieces/strips. But it was beautiful quality in a gloriously rich, wide, range of colours. I decided to make a wool throw.....something just right for draping over oneself while knitting, watching TV, reading or maybe even a little lazy afternoon snooze.

This is where Susan came in, I had way too much and needed help using this stuff up. We split the stash...I took predominantly blues and greens...Susan, reds and oranges. We also used some thrift shop finds to supplement....a kilt, a man's suit and a few other pieces were disassembled and in some cases dyed to give us exactly the extras we needed. (for some reason I don't have any of the greens pictured here)  the pile on the right was the result of some dye experiments. 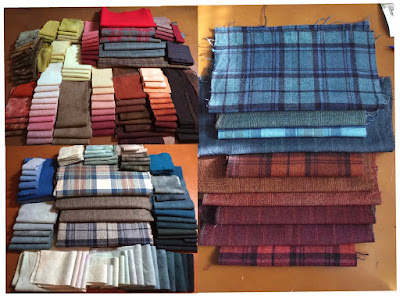 I created a conceptual diagram of the sort of thing we were trying to achieve and we were off. 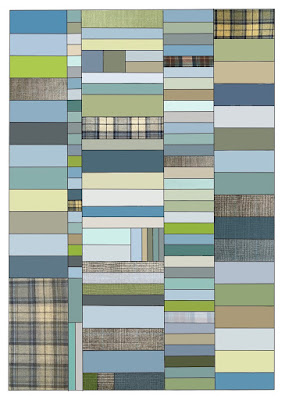 The next step was to make sure everything was cleanly trimmed (the trimmed bits looked too pretty to toss away.) 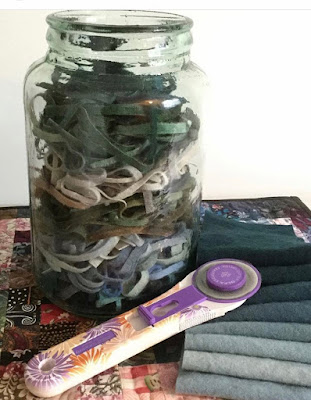 and to sort the pieces by size....some were as much as 11" long, others closer to 4". then we just played laying them out to make workable rows. 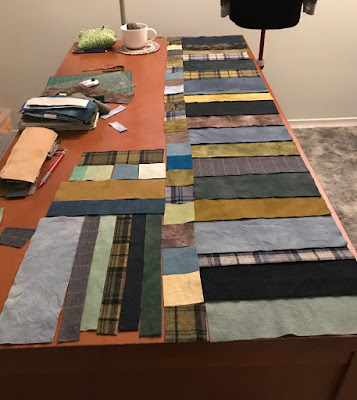 We decided that we would sew them together in an unconventional way.....so that we would not be dealing with tons of seams, my reasoning for this was that I knew I wanted to do big stitch quilting at the end. I think Susan was more clever and took hers to a long-armer  ( I will explain shortly) 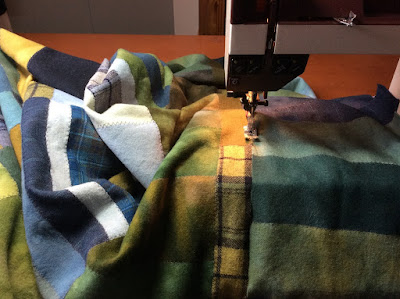 Once we each had a pleasing layout, the pieces were simply machine stitched by butting the raw edges up to each other and using a triple zig zag which was such a pleasant sewing process.  Long vertical rows were created, then each row was attached to the next in the same manner 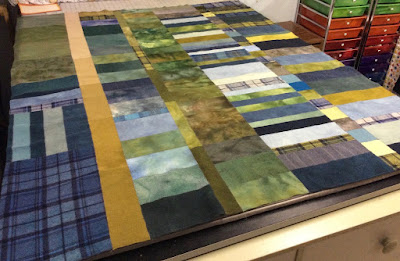 While I stayed very much in a subdued colour scheme, Susan on the other hand, added some brilliant, unexpected pops of colour to hers. 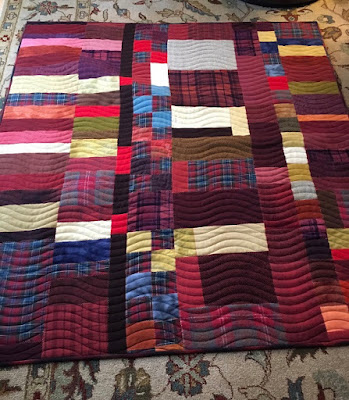 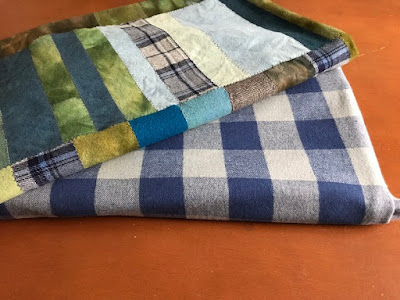 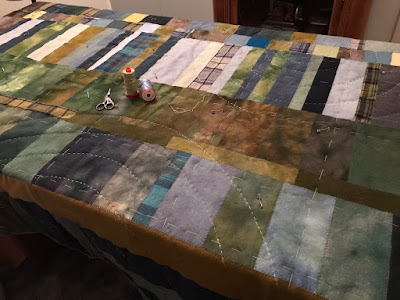 A piece of soap served to mark the concentric circles which I would hand stitch using 12wt Aurifil cotton. The flannel for the back was only 45" wide....it needed to be pieced to get the required width, Susan pieced hers entirely with the flannel 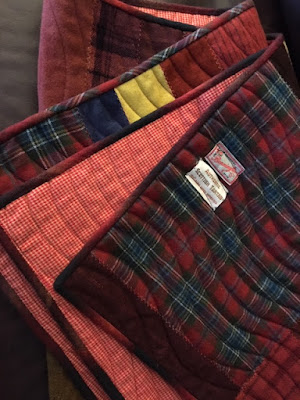 ...I chose to add a row of the same wool pieces used on the front to create my pieced back 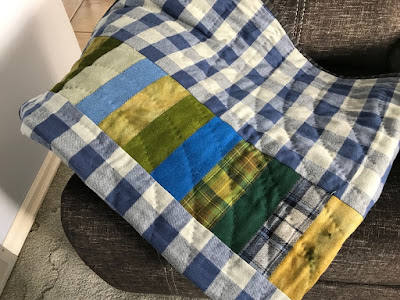 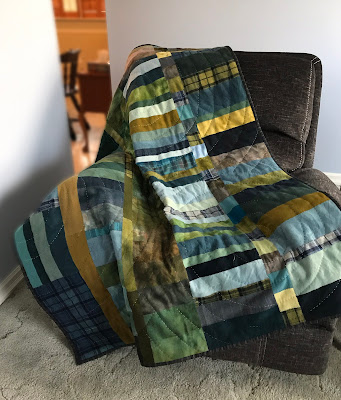 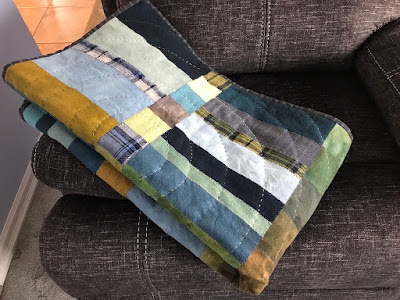 I used striped cotton leftovers from the backing of a previous quilt for my binding.....Susan pieced wool to create her binding 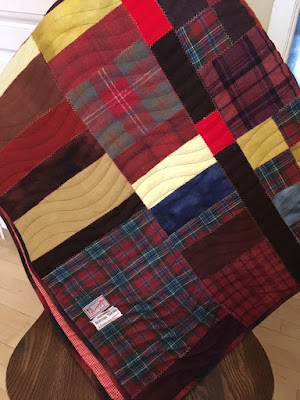 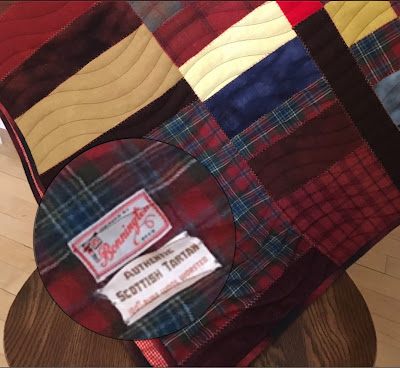 Now.......time ( and use ) will tell if not having sewn traditional seams will have been a poor decision.....I must admit that I am a little concerned about how much stress the joins will endure over time. I think Susan was wise to have her quilt machine quilted as I think that will help its sturdiness and durability.

But, I have been using mine every evening for several weeks and it is not showing signs of any problems yet....."yet" being a key word.  I may go back and add more stitching to mine just the same.

oh....and btw......we were not completely successful at "stashbusting"  LOL!

I promise I have a fresh post coming in a day or two, but today I wanted to share a link with you.

I have mentioned Bluprint before (previously Craftsy) whatever your interests, whatever you might like to learn more about...you can likely find a class on that topic. Quilting, sewing, knitting, cooking, baking, decorating, drawing, painting, spinning, crocheting....the list goes on and on.
I quite like the platform.....sometimes I "take" the whole class...sometimes, its just one portion or technique I want to see/learn and I jump to that part of the video class. I am always amazed to learn how much I don't know I don't know  LOL!

If you are curious...want to learn more....I have this link for you here.

I dont think I have EVER made a post without an image so I guess I need to put something here...how about some of my recent spinning......much of what I have learned about spinning and processing fibre has come from watching Bluprint classes. 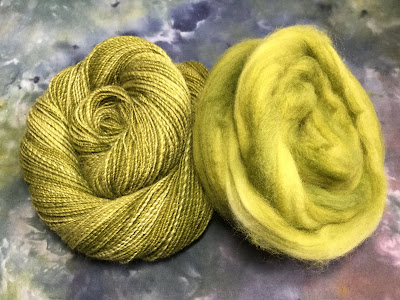