I first began spinning in July of 2017. (that post can be found here) I began with a homemade drop spindle and while I have tried a variety of fibres, I had not yet explored a different type of spindle. I was curious about the difference between spinning with a drop spindle (where the spindle is spinning suspended in the air) and spinning supported. ( a support spindle, is as its name implies, spins "supported" generally in some type of bowl)
why had I not tried one? well I did not have one. There are many gorgeous spindles available online, but of course, by the time one adds shipping and currency exchange they can get a little pricey....what if I find I don't like spinning this way.....would be a bit of a waste. So I decided to try making my own.

I gathered a few things from the hardware store and because I wanted a tapered shaft I used an old paintbrush instead of a dowel. 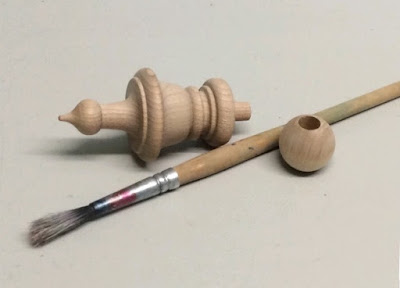 I chose this finial because it had a very nice point that I thought would "spin" well.  I cut the ferrule/brush part away leaving just the wooden handle. My plan was for the wooden bead and wood glue to allow the finial and shaft to connect and bond together. I also made some with extra weight by adding a washer. and of course, played with adding colour to the wood as well. 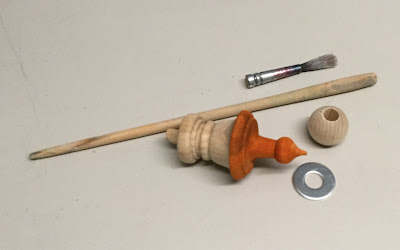 To make the support bowl, I picked up a Danish drawer pull that has a very nice concave form. I wanted the "bowl" to have a flat base so a couple of small wooden toy wheels completed the assembly. 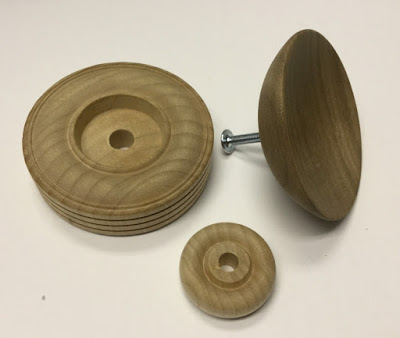 I gave everything several coats of varnish with some sanding in between to give the spindle a lovely sheen and very smooth feel. 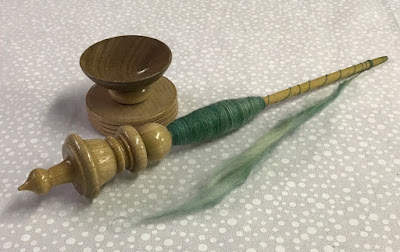 These may not spin as long as some of the professionally wood turned beauties, but they work quite well and are allowing me to learn how to spin supported. 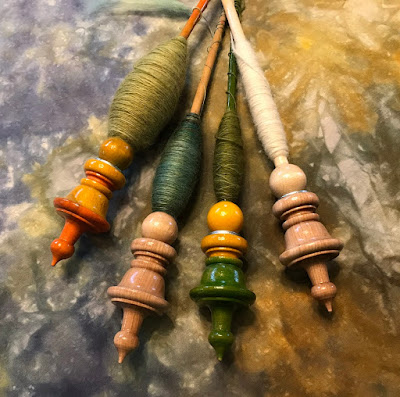 I am really enjoying spinning this way as it is even more portable than a drop spindle. Rather than having my arm up and out as I need to with the drop spindle, I can spin seated with the bowl in my lap.....everything is close to the body.....meaning I can spin for longer periods of time and just about anywhere I like.

Robbie, that's the exact comparison I was searching for! MacGyver! Of course! Jill, you are amazing.

I have missed many of your posts due to losing my blog links and now I am so happy to find you. I always love seeing what you are up to and these spindles are beautiful and really do spin gorgeous yarns in your talented hands. You are amazing because you figure out how to make the spindles and then spin your fibers. Blessings in 2019...